n a world of explosive change and transformation, leaders at all levels—from heads of state and global corporations to entrepreneurs and gig economists—will offer the best opportunity for leveraging change and transforming our lives for the better. This includes how we work, play, govern ourselves, and consider and plan for our collective futures. This thought-provoking book invites readers to explore the intersection of transformational leadership, systemic thinking, and experiential learning—all required to survive and thrive the tsunami of changes and disruptions caused by the Fourth Industrial Revolution, the Covid-19 pandemic, climate change, and misinformation trends.
Learn more

he constant cascade of new technologies and social changes are creating a more empowered population. Workforces are increasingly dispersed, demanding of self-expression, and quite possibly disengaged. Within this topsy-turvy context, leaders must spark creativity, drive innovation, and ensure sustainability.

Part philosophy, part business, and part history, in Everything Connects, you’ll learn from the wisdom of 2500 year old Eastern philosophies and the interconnected insights of Leonardo da Vinci. Couple that with Fortune 100 corporate cross pollination for creativity and startup thinking for how to adapt with ease, and you have Everything Connects. This isn’t just a quick fix for your next financial quarter; this is how you succeed in the long run.

TRANSFORMATION REQUIRES MUCH MORE THAN TECHNOLOGY

rom The Into: “Given the rate of change that we have experienced and will continue to see, it’s been a challenge trying to stay on top of everything that’s taking place. As we’ll see, it will require much more than simply obtaining the latest technology, plugging it in, and sitting back to watch reinvention take place. From top to bottom, organizations will be compelled to change entire mindsets, attitudes, and assumptions about how they operate, how they can grow, and even about the very reason for their existence.

Change, as driven by technology, is as much an adjustment of mindset as it is a new set of tools that everyone must learn how to use. This book is geared to addressing that unprecedented journey. And when I use the word journey, I mean to emphasize that reinvention never has any sort of fixed end point or conclusion. Rather, it’s an ongoing pilgrimage—one characterized not only by obstacles to be met and overcome but also by fresh opportunities that are continually presented at each step along the journey.

But it can also be equally perilous. As you’ll also learn, the road to transformation is complex, and several organizations and companies have failed to grasp the scope and import of what reinvention really encapsulates. I believe this book will help you and your organization work toward realizing a far more rewarding and meaningful outcome.”

Change and disruption has swelled into a tsunami carrying enormous consequences and impacts. The question is, will you be pulled under by these crashing waves of change? Or will you choose to adapt and learn to navigate the stormy seas so that the waves lift you up, and others along with you? Find out in these ground breaking, digital classes, based on the #1 Wall Street Journal bestseller LIFT. 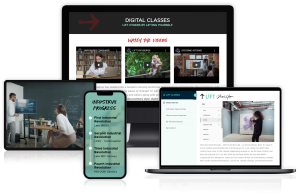 Based on the Wall Street Journal and USA Today bestselling book Everything Connects, Faisal Hoque presents a framework for understanding how the power of Mindfulness and Creativity create a long-term culture of Innovation to adapt to our rapidly changing world. These ideas aren’t just a quick fix for your next financial quarter; this is how you succeed in the long run. Find out in these ground breaking, digital classes. 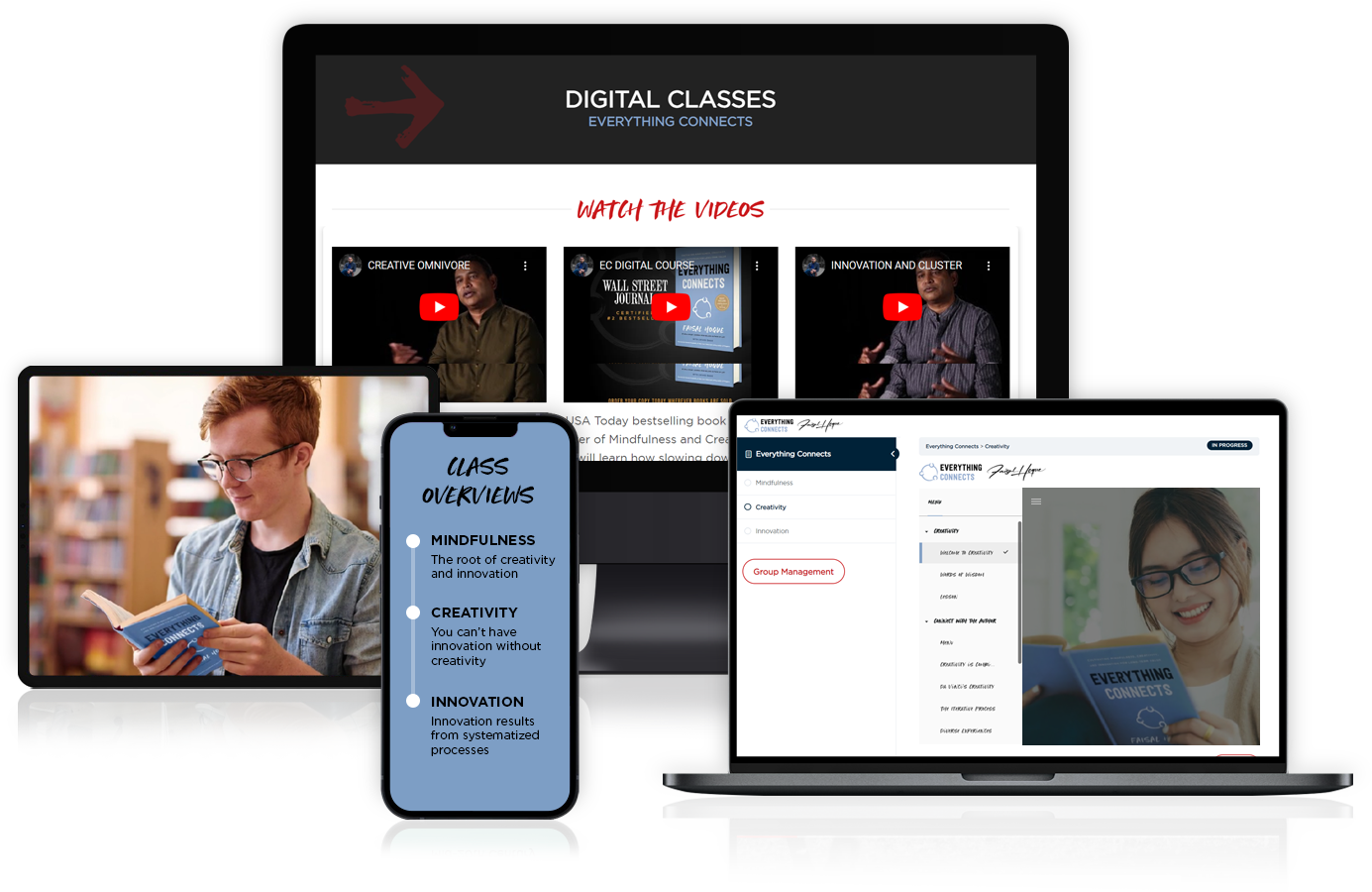 Professor of Leadership, IMD Business School and author of Battle Mind: How to Navigate in Chaos and Perform Under Pressure

“In e-Enterprise, the author explores the rich and rapidly evolving landscape of electronic business–a journey well worth taking.”

Widely known as a “Father of the Internet”

“The focus on mindfulness in Everything Connects sets it apart to traditional type-A thinking.”

“One conversation with Faisal Hoque and you understand why his new book – Everything Connects is powerful.”

“If there is a single line in this book that sums up what the author thinks of leadership, it is this: “Leadership is a way of owning the impact that you and your organization is going to have on the world. ”Pick this one up when you want to challenge the champions of the old way of doing things, and perhaps encourage them to think in new ways.”

“At some point, every business leader will struggle with the management topics outlined in The Power of Convergence. How they think about these issues, more importantly, how they make the right decisions regarding them is critical to the success of their organization.”

“In his compelling new book, Faisal Hoque gives a much-needed LIFT to leaders who want to stay on the forefront of change, and not be left behind.”

“This book outlines the challenges we face in the modern world and how leaders will need to address them.”

“I highly recommend LIFT to all leaders aiming to enhance their leadership capacity for growth and crafting their own lives embracing a brighter future for others.”

One of the top global leaders on leadership, author of The Vision Code, the da Vinci of visionarv leadership

“An inspiring book that helps us to be aware of the huge world changes and our role as leaders in different contexts.”

“By marrying the power of creativity and innovation, there is very little we can’t accomplish. Everything Connects shows where and how this is happening and inspires us to join in this new era.”

“Amid the tumult of change we are experiencing comes LIFT by Faisal Hoque. The book diagnoses what’s going wrong and provides insights into what leaders can do to improve the situation for all of us.”

“Everything Connects is as much about business as it is about life.”

“In LIFT, Faisal Hoque offers innovative steps for transformational leadership that demonstrates how empathy is a crucial aspect in inspiring higher levels of organizational effectiveness.”

“Our children, and their children, may one day ask about these times, ‘What were you thinking? What were you doing?’ If you are asking yourself, What can I do?’ this book is for you. Faisal Hoque gives us clarity, purpose, direction – and hope. ”

CEO of Mindscaling, and author of Small Acts of Leadership

“There is so much in this book to like, and the possibilities are far-reaching…. If you want to be this kind of new leader, or if the idea excites you for the great changes it could bring, Lift: Fostering the Leader in You Amid Revolutionary Global Change by Faisal Hoque is a must-read.”

The outputs of our efforts are designed to lift individuals and organizations to their next chapters by connecting seemingly unconnected dots.

The Crane in the NextChapter represents vigilance, longevity, and good fortune. In Japan, the crane is a mystical creatures symbolizing good fortune and longevity because of its fabled life span of a thousand years. Seeing a crane is still believed to be very auspicious and paper cranes and gifts having crane motifs are often handed out for eternal blessings and good wishes.

In Native American traditions, cranes were renowned for the oratory of their trumpeting calls and were the ‘Speakers for the Clans’. In Navajo Arizona, the Ziltahjini Peak is named after standing cranes. Native Americans worship cranes and call upon them for longevity, wisdom, and immortality. The birds are Native American symbols of independence.

Everything Connects. Making connections between disparate things is the key to creative thinking. The ritualistic practice of thinking about how different things relate to each other, and how distinct things could be combined to make something completely different, results in sustainable innovation.

“When we recognize the constellation of relationships within our ecosystem we can begin to understand their shared alignment, a process that I describe as convergence – the overlapping nature of art, science, and spirituality.” – Faisal Hoque, Founder of NextChapter

Faisal Hoque is an accomplished entrepreneur, noted thought leader, technology innovator, advisor to CEOs, BODs, and the US federal government, and an author with more than 25 years of cross-industry success. He is the founder of SHADOKA, NextChapter, and other companies. They focus on enabling sustainable and transformational changes.

Throughout his career, he has developed over 20 commercial business and technology platforms and worked with public and private sector giants such as US Department of Defense (DoD), GE, MasterCard, American Express, Northrop Grumman, CACI, PepsiCo, IBM, Home Depot, Netscape, Infosys, French Social Security Services, Gartner, Cambridge Technology Partners, JP Morgan Chase, CSC, and others. What sets Faisal apart is the unique position and perspective he has always maintained, which is grounded in hardcore technology with deep roots in leading-edge management science.

“Faisal Hoque, the entrepreneur, innovator, was born in Bangladesh and found himself in the boardrooms of Fortune 100s by the time he was 27.” – Dr. Marshall Goldsmith, #1 Leadership Thinker in the World (Thinker’s 50/HBR)

“Talk about a trip: entrepreneur Faisal Hoque started his career in the U.S. as a “janitorial engineer,” but eventually went on to raise $10s of millions for his businesses, despite setbacks like being ousted as CEO of his own company (sound familiar, Apple?).” – Fast Company

His book, The Power of Convergence (published by the American Management Association [AMA]), was released in April 2011 and almost immediately was named “One of the Best Business Books of 2011” by 800CEOREAD and CIO Insight. Two of his previous books, Sustained Innovation and Winning the 3-Legged Race, were also included in the “Top 5 Transformation Books” of the last few years, while Sustained Innovation also ranked in CIO Insight magazine’s “Editor’s Picks: The 10 Best Business Books of 2007”. His highly acclaimed book The Alignment Effect (Financial Times) was published in 2002, and e-Enterprise (Cambridge University Press) in 2000.

His broad areas of expertise include innovation, leadership, management, sustainable growth, transformation, strategy, governance, M&A, frameworks, and digital platforms. He holds a strong belief that it is through knowledge sharing that we may provide the greatest clarity on how to improve our collective future. As a globetrotter, he is passionate about nature, people, culture, music, and design, and he loves to cook.

Here is his personal story on his blog – “Corridors of Carbondale”.

his book examines the stories of a variety of leaders who faced ill health, professional setbacks, emotional loss, and a host of other life-changing events, in order to illustrate how each achieved personal transformation and success by mining their own resilience.

Resilience is the universal human capacity to face, overcome, and even be strengthened by experiences of adversity. The book is divided into three sections, each of which are key concepts in the development of one’s own ability to bend, and not break, in the face of a personal or professional setback.

Get It For Free

Use It For Free

Use It For Free